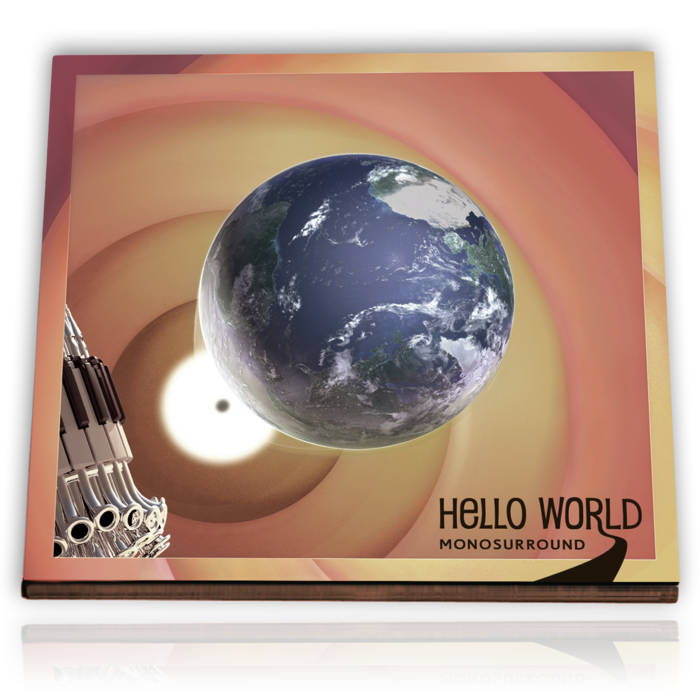 Exclusively on BandCamp: This is the "Hello World" album as it appears on CD – with special transitions between the songs. The ultimate "Hello World" journey feeling.
Just set your mediaplayer or CD burning software to 0.0 seconds pause between the tracks. Lean back and enjoy.

This version is only intended as complete album download. If you prefer single tracks (proper start and ending) we recommend you to download them here: monosurround.bandcamp.com/album/hello-world

From the icy hole which minimalistic electro leaves in its wake, comes the inevitable response: maximalism. Monosurround from Germany bring you this new maximalism, and they’re here to present you with their album: “Hello World”.

Two musicians in Berlin embody this new maximalism: Erik Schaeffer and Ramtin Asadolahzadeh. You can feel it in each aspect of their music: experiencing them live, and now this epic album. It’s an encyclopedia of sound: chromatic vocals, energetic electro beats, and galactic melodies. With all of this and their penetrating bass lines, Monosurround is Germany’s answer to the French hooligan disco, à la Ed Banger and Kitsuné.

What’s its impact? Very simple. The range of music continually surprises as the album unfolds. Every song is a chapter; it’s own small world in the greater vision of the album. In “Mushroomed” you’ll note skilled musicianship locked in the melodic song writing. “Gloryland” brings together magical Glampop and masterful Turntablism. 13-Tracked “Hello World” is truly the antidote to the miserable minimal-flu from which we’ve all been suffering.

But wait! There’s more to these boys than musical excellence. The project comes wrapped in love and imagination. In a tapestry of rich artwork Monosurround deliver an album that invites you into a parallel world of story-telling, travel, and intrigue. It’s a world we’ve all been waiting for: encompassing music, narrative and imagery.

Monosurround present their maximalistic sound and concept on a huge scale in “Hello World”, leaving no doubt they are going to make a big impact on the electronic music scene.