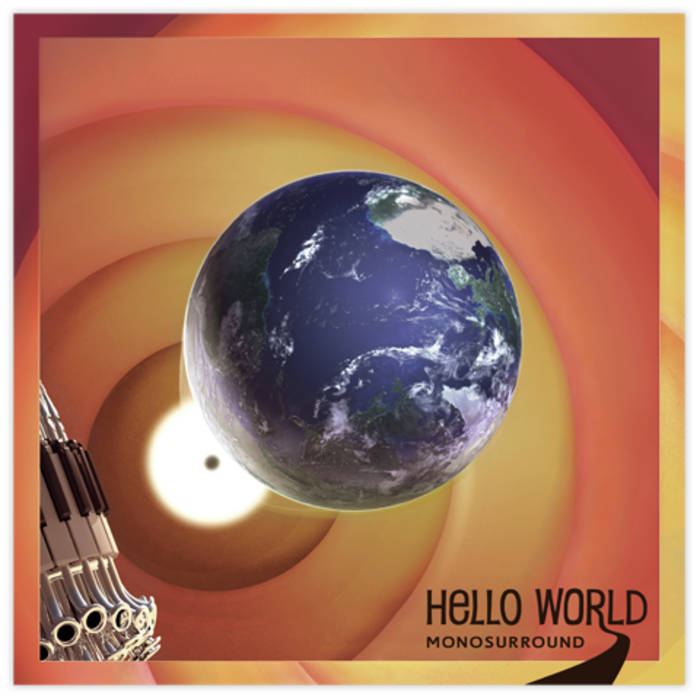 From the icy hole which minimalistic electro leaves in its wake, comes the inevitable response: maximalism. Monosurround from Germany bring you this new maximalism, and they’re here to present you with their album: “Hello World”.

Two musicians in Berlin embody this new maximalism: Erik Schaeffer and Ramtin Asadolahzadeh. You can feel it in each aspect of their music: experiencing them live, and now this epic album. It’s an encyclopedia of sound: chromatic vocals, energetic electro beats, and galactic melodies. With all of this and their penetrating bass lines, Monosurround is Germany’s answer to the French hooligan disco, à la Ed Banger and Kitsuné.

What’s its impact? Very simple. The range of music continually surprises as the album unfolds. Every song is a chapter; it’s own small world in the greater vision of the album. In “Mushroomed” you’ll note skilled musicianship locked in the melodic song writing. “Gloryland” brings together magical Glampop and masterful Turntablism. 13-Tracked “Hello World” is truly the antidote to the miserable minimal-flu from which we’ve all been suffering.

But wait! There’s more to these boys than musical excellence. The project comes wrapped in love and imagination. In a tapestry of rich artwork Monosurround deliver an album that invites you into a parallel world of story-telling, travel, and intrigue. It’s a world we’ve all been waiting for: encompassing music, narrative and imagery.

Monosurround present their maximalistic sound and concept on a huge scale in “Hello World”, leaving no doubt they are going to make a big impact on the electronic music scene.

Track Name: We
What is it all about?
Monosurround!
Track Name: Mushroomed
Hey, hello, my name is
whatever you want it to be.
And green is not your colour.
You`ll try anything you can swallow.
Here we go, here we go!
Small talk and a one man show.
Do you feel connected
to the sound or are you just killing time?
And so, you try to move on,
searching for what you just don ́t know.

Oh, why don ́t you take it slow?
Take a backseat,
come and join me for free tonight.
Unwind, security has taken a walk.
Information overloading now.

Been a long time coming, can ́t you
see I find it funny
that you ́ve mushroomed?

Rabbits in your headlights,
if there ́s silence you don ́t feel right
́cause you ́ve mushroomed.

Your evolving state of mind
will unlock all of space and time,
please offer your assistance to those
less fortunate.

Hey, hello, what time is it?
It’s only a quarter ́til you see me – take it!
Reveal or seal your senses.
You’ll steal anything you can borrow.

The man with the gun
is coming home.
Let ́s get out of here!
No time to lose.

Bo Bullet is invisible.
This man is a miracle.
He ́s the man with the black hair.
He ́s the man in the golden chair.
Track Name: Hello World
Hello World!
How are you?
Nice to meet you.
Track Name: Close Up
Oh my god!
This might jam right there, boy!
Let it go!
Track Name: Message in a Bottle
Sitting in a pub drinking that drink,
smoking that smoke,
start a talk with a joke – ha ha!

Take a look in my glass at the bar:
There ́s someone swimming in my jar!

Make a step,
give a punch,
keep your guard,
be liquid, like water!

Make a move,
take a break,
use your head,
be fluid, like butter!

Oh man, what a mess, god bless,
gotta confess: smoke a little less.
Strange voice talking in my ear –
gotta get out of here!
Going further, much harder,
it ́s getting louder,
I need a little help, Mom.
Beware, it ́s a nightmare, nobody cares!

I don ́t care, what they say,
there ́s nothing that compares.

Pretty soon I ́m gonna leave
my hometown – that ́s no lie!

Higher, higher, fly umbrella,
to the land of Cinderella.
Thru the clouds and thru the rainbow,
spinning ́round like a propeller.

I ́m on edge! I ́m on fire!
Dear umbrella take me higher.

Have to leave mother’s hand,
gonna find Gloryland.
Track Name: Captain in the Sky
I ́ve got a little spaceship,
with a yellow flight strip,
flying high with my crew
on the way straight to you.
With my super battle power
and thousand miles per hour,
I ́m your captain in the sky,
I ́m your rescue.

Cruising thru the galaxies,
eliminate all the enemies:
Green dressed, troubling creatures
blood swagging scary monsters.
Down on earth, over the moon,
louder than words, quite like a doom.
He ́s around, he ́s the guy,
he ́s the captain in the sky.

He is the last of his kind,
uneasy, suspicious mind,
a man, who ́s always close-by,
the captain in the sky.

Passing routes, ruled by machines,
flying straight to his queen.
She ́s beautiful, so wonderful,
just incredible - phenomenal!
As he finally hugged her tight,
she said: “Captain, you ́re just right...”
He ́s around, he ́s the guy,
he ́s the captain in the sky.

She tried to keep him nearby,
but next day he had to fly.
From deepest eternity
it shouts: “Emergency!”